I have this thing for embroidery hoops. I rarely embroider, I just have a thing for the hoops themselves. I have a narrow wall in my studio beside my sewing table that is perfect for a cluster of hoops, so I'm working on filling that with hoopy goodness. 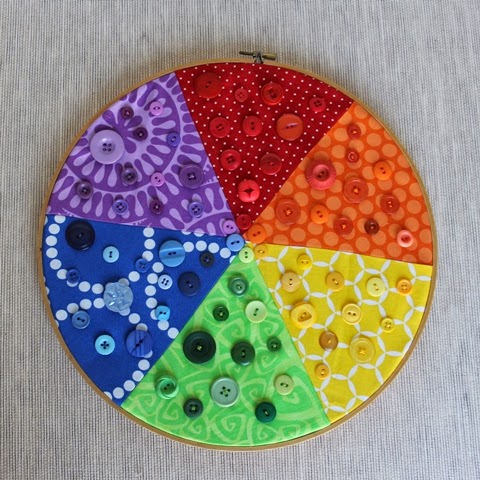 Since every artist needs a colour wheel handy, I decided to make a fabric colour wheel for my wall., and since you can never have too many freebies, here are the directions in case you want to make your own.

Materials:
Six, 10in x 10in squares of quilting cotton in the following bright colours - red, orange, yellow, green, blue and purple. You can use solids or prints. 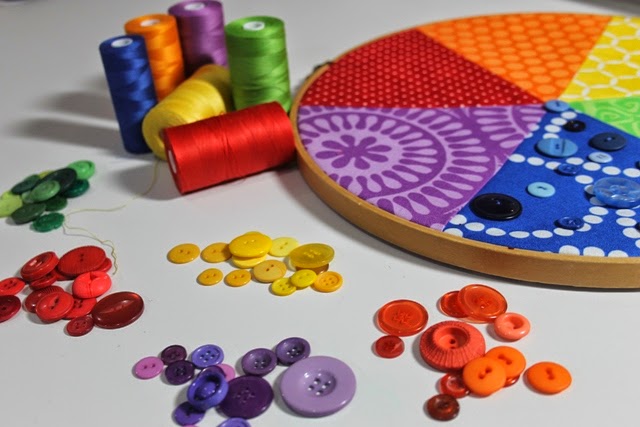 Neutral sewing thread (I used grey).
Sewing thread to match each fabric (This is for sewing on buttons, you could also use embroidery thread).

72 buttons of various sizes - 12 buttons in each colour. If you don't have this many buttons in your buttons stash you could definitely get away with fewer.

Cut an equilateral (60 degree) triangle with a side measurement of 9.5 inches for your template out of paper or cardboard.

Cut a triangle from each colour fabric.

Using a 1/4 inch seam and your neutral thread, machine stitch each triangle in colour order in sections of three pieces to make two half hexagons.
Stitch red to orange and orange to yellow; then green to blue and blue to purple.
Sew the two half hexagons together.

Press well and then place the hexagon into your embroidery hoop, pulling it tight. Be sure to place the screw at the top. On the back, tack around the diameter of the hoop about 1/2 inch in from the edge to gather up the excess fabric in the back.

Turn over and lay out your buttons on the front in one colour grouping at at time and hand sew them in place.

Your custom colour wheel is now ready to hang. Or hold up to the sunshine if you want to see translucent prettiness. 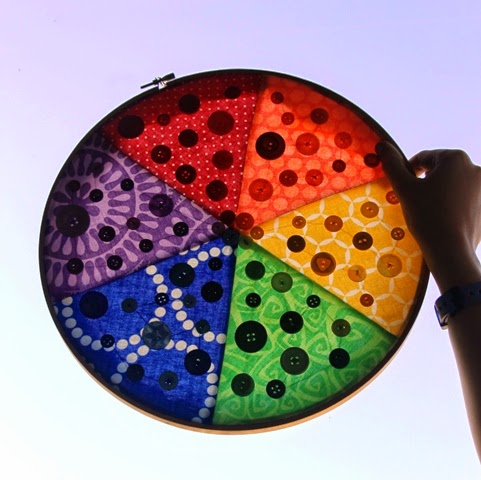 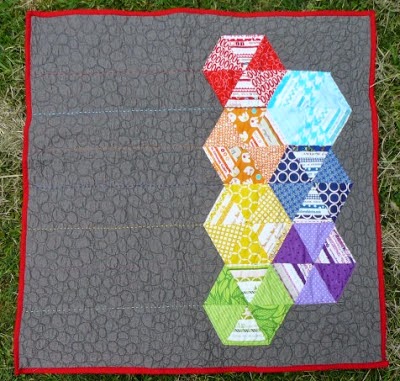 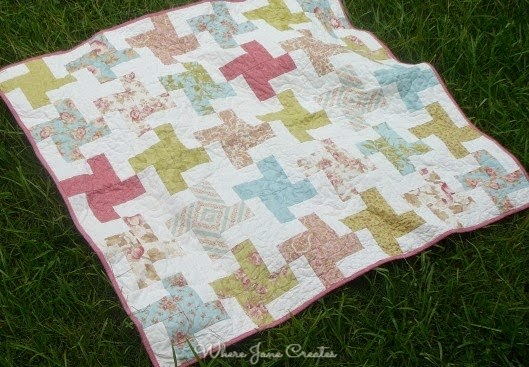 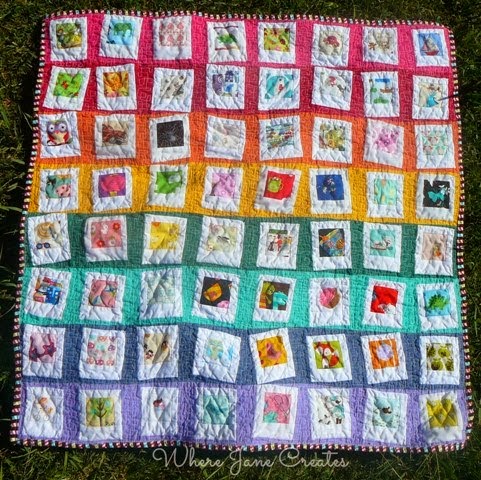 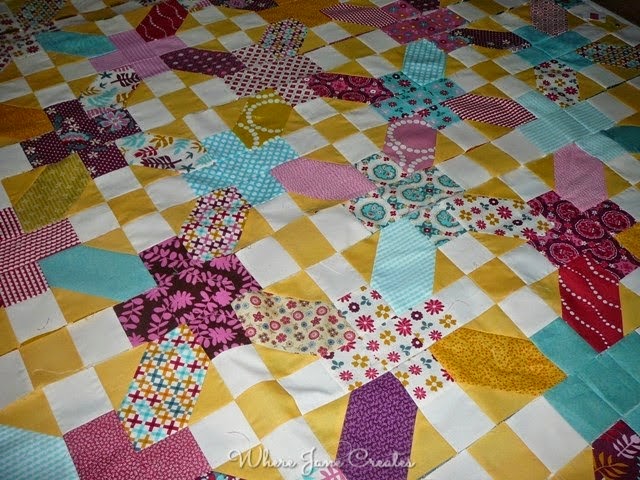 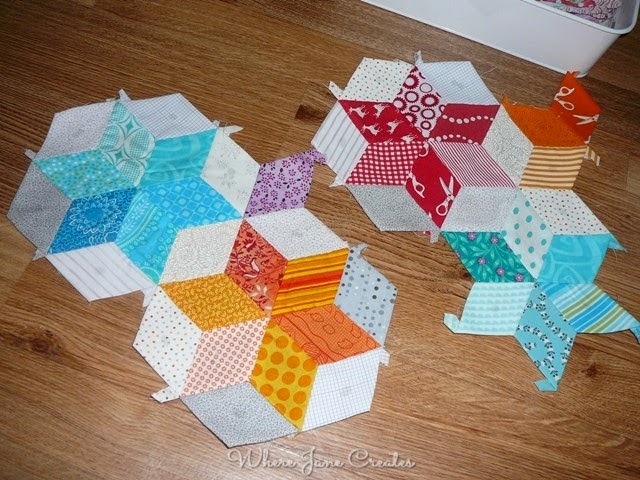 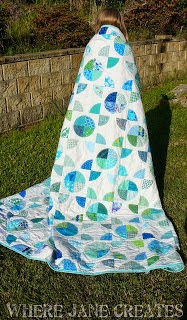 So this is our first Make Modern blog post - and oh the pressure! An inaugural post! It must be special and extraordinary and amazing and keep the readers coming back! Or perhaps we shall simply go for a blog post that tells you what we're doing and why. Yes. Let's go with that.

Make Modern is new venture of three Aussie quilters. We are passionate about our craft, and want to connect, inspire and enable fellow quilters who feel the same way!

So here we are! With a fabulous magazine on its way (ooh wait til you see what we have lined up!), and the start of a blog that will be filled with resources, quilty help and tips, and pictures of cats on quilts (No, Jane, no.).

We are very excited about this venture and would love to have you involved! So drop us a line, tell us what you'd like to see in a modern quilting magazine, or maybe you have a great idea to share with us for a project or an article! We want to hear it! Quilting! Sewing! Modern! Yay! Let us all unite in our quilty passion and go Make Modern! 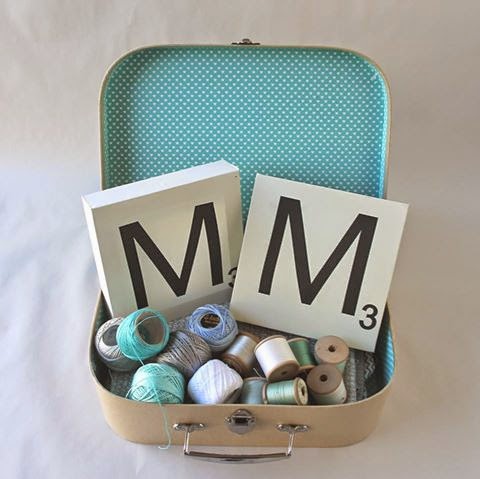 Posted by makemodernmagazine at 18:54 2 comments:

Make Modern is Australia's modern quilting magazine, written by a team of Australian quilters. We publish a bi-monthly digital magazine with over 100 pages, 10-14 modern quilt patterns sourced from talented pattern designers from Australia and overseas, and 12 feature articles which include stories from the quilt community, interviews with designers and quilt know-how. Sound good? We're digital so no matter where you are in the world, you can subscribe and join in the modern making fun!